Meet Kevin Mesch, one of The 50 Faces of NewBridge 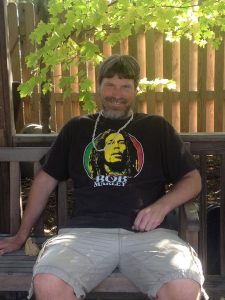 [NewBridge introduced the 50 Faces of NewBridge in 2013 to celebrate its 50th anniversary.]

Kevin Mesch studied English and French literature in college, but he didn’t want to become a teacher. Music was his passion, and he dreamed of making a career of it.

But several years after graduating, “things were melting down with my mental health.” At age 28, he was diagnosed with paranoid schizophrenia.

After that, Mesch moved around a lot. “I felt like I was on the run,” he said. Mesch left Portland, Oregon for San Diego, California. When he didn’t get the apartment he wanted, he took a bus to the south of Mexico and then hiked into Guatemala, where he had a brush with the law. The New Jersey native returned to the Garden State after that experience.

NewBridge Services staff met with him while he was being treated in a psychiatric hospital and arranged for his discharge to one of the nonprofit’s group homes, which provides round-the-clock supervision.

Mesch did well, and after 10 months, he recently moved into a NewBridge apartment, where he has more independence but still receives support services. Mesch attends NewBridge’s Crossroads adult day treatment center and participates in NewBridge Enrich horticultural therapy. He also goes to a self-help center and Alcoholics Anonymous meetings.

“I’m in a much better place than I was,” said Mesch, who again is working on his music. “The people at NewBridge have always heard me out, and followed through on plans.”

I believe in NewBridge because…they have a helpful interest in my success.