Morristown can expect an uptick in homelessness and greater demand on its police department, emergency responders, and Morristown Medical Center’s emergency department after New Jersey changes the way it funds community mental health services on July 1,  according to the New Jersey Community Mental Health Coalition.

The state’s switch to fee-for-service funding in the 2018 fiscal year budget will drastically reduce  revenue for community mental health providers, preventing them from treating people no matter their ability to pay. As the center of services in Morris County, Morristown will take the brunt of the fallout when residents with mental illness lose access to treatment. 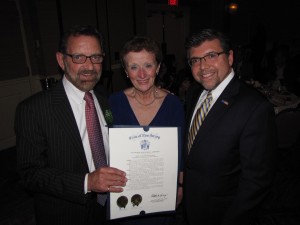 “Many people in need of treatment will have difficulty receiving it, and we know from what’s happened in other states that cut mental health funding that there will be serious repercussions,” said Robert L. Parker, CEO of NewBridge Services, a member of the NJCMHC.

Untreated mental illness is a major contributor to homelessness, so Morristown can expect a rise in people living on the street and in shelters, Parker said. Lack of treatment also can result in erratic behavior, causing individuals to become dangers to themselves and others, the Morristown resident said.

“The burden will fall to the Morristown Police Department, EMTs and the emergency department at Morristown Medical Center,” Parker said. The Morris School District also could be impacted, forced to hire additional counselors to accommodate students who lose access to care at community mental health centers, he noted.

Under fee-for-service funding, the state will reimburse providers for certain services considered “billable,” but not others, and in some cases at rates that do not cover actual costs. NewBridge estimates it will be unable to serve as many as 768 clients and face staff reductions of up to 20 percent.

“This new system, it’s not working for us!” Myers said. The Morris County Board of Chosen Freeholders in March passed a resolution urging the state to put fiscal safeguards in place during the transition to fee-for-service funding, or to delay its implementation.

“Unless the state adds safeguards to the new fee-for-serving funding, NewBridge and other community mental health providers will cease being the safety net that has sustained people in need for more than 40 years,” Parker said.

Last year alone, NewBridge helped 10,000 children, adults and seniors a year through counseling, housing and education programs in Morris, Passaic and Sussex counties, and elsewhere. NewBridge began as a local mental health center in 1963 — the year as President John F. Kennedy called on Congress to create a national program for mental health — and has expanded and evolved over 54 years to meet the growing needs of its communities.

NewBridge and eight other community mental health nonprofits formed NJCMHC in April to advocate for continued comprehensive treatment and care for mentally ill adults and children throughout New Jersey.

NewBridge Services, a 501c(3) nonprofit, is a premier provider of counseling services, housing and educational programs in northern New Jersey serving 10,000 adults and seniors last year alone. NewBridge treats mental illnesses and addictions; teaches skills for coping with stress, grief and challenging relationships; builds and manages affordable housing; offers school-based programs that teach children and adolescents resiliency skills for healthy emotional development; helps young adults succeed in their education and prepare for careers; and supports seniors so they can remain independent. Throughout its more than 50-year history, NewBridge has remained true to its mission of bringing balance to people’s lives by tracking shifts in communities’ needs and providing innovative, effective programs to meet them.