Sixty years later, NewBridge Services is a regional provider of counseling, housing and education that annually helps thousands of children, adults and seniors in Morris, Passaic and Sussex counties, and beyond. Over the decades, NewBridge Services has expanded both its service area and programs to meet emerging needs.

Last year, NewBridge joined forces with Christian Health, a large health care organization in North Jersey, to ensure NewBridge’s sustainability long into the future. It purchased property for a new headquarters adjacent to its adult psychiatric day treatment program and apartments for adults with special needs in Pequannock’s Pompton Plains section. By 2024, NewBridge will operate from the campus. 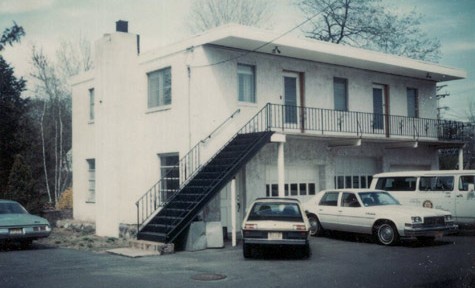 Dr. Kurt Manrodt, municipal judge Herbert Irwin, and the Rev. Donner B. Atwood, pastor of The First Reformed Church of Pompton Plains, had each witnessed growing mental health challenges in the community. None could fix the problem alone, so they joined forces, along with concerned residents Mary Jane Kelly and James Ryan, to create the nonprofit.

“The foresight of our founders was transformational,” Borden said.

The mental health agency opened its doors on Dec. 23, 1963 in the former Pompton Plains library by town hall. At the start, it provided mental health services to adults and children in Pequannock and five neighboring towns.

In 1977, NewBridge tripled in size. Its part-time day treatment center became full time, emergency psychiatric services were added, and counseling for at-risk clients increased. That same year, NewBridge became one of the first mental health agencies in New Jersey to create a youth services bureau to focus on the needs of children and adolescents with mental illness.

In 1980, when the state was still heavily reliant on boarding homes for people released from psychiatric hospitals, NewBridge created a state-funded, long-term community residence for older adults who had been hospitalized five years or more. It was among the first of its kind in New Jersey.

From Children to Seniors

In 1983, the organization created a free alternative education program for young adults who struggled in traditional high schools. The program, now called NewBridge Jobs Plus, helps young adults earn their high school diploma, prepare for college and technical schools and get on the path to a career. It garnered national recognition in 2012 when it was featured on the CBS Evening News.

A community tragedy in 1984 led to another NewBridge initiative. A school nurse contacted NewBridge after an eighth grader committed suicide. NewBridge put together a suicide prevention program for schools that is still in demand today. NewBridge went on to develop an array of school programs geared to build resiliency in children and adolescents, including an anti-bullying program. Since 2017, NewBridge has trained more than 500 educators and parents in Youth Mental Health First Aid to recognize and respond to a child or teen having a mental health crisis.

At the other end of the age spectrum, NewBridge developed services to support seniors. In 1987, it created NewBridge Senior Assistance for Independent Living (SAIL), a free program that links Morris County residents age 60 and over with community services to help them remain in their homes. NewBridge SAIL added respite services for caregivers in 1999 and hired an advanced practice nurse in 2003 to provide at-home medical evaluations. NewBridge@Home, launched in 2010, provides in-home counseling to homebound senior citizens and other adults in Morris County who are unable to leave their homes, as well as for their caregivers.

NewBridge’s addiction services emphasize awareness and prevention through programs tailored for children, parents and educators. NewBridge provides evaluations, treatments and referrals for teenagers through seniors. In the late 1980s, NewBridge became a pioneer in treating mental illness and substance abuse together. NewBridge developed a screening process to identify clients with both, and provided training in addiction treatment to its mental health counselors. It created a model for integrating addiction and mental health treatment at little expense that other agencies could replicate. NewBridge’s co-occurring program received national recognition in 2010.

NewBridge was at a crossroads in 1992. The trustee board had to decide whether to remain independent despite financial uncertainty or allow an area hospital to absorb the nonprofit. The board voted 11 to 1 to cede independence, but the lone dissent cast by member Marie Cetrulo prompted the board to reassess its position. After a great deal of investigation and soul-searching, the board voted unanimously to remain independent to uphold the organization’s commitment to the communities it served.

The nonprofit adopted the name NewBridge Services in 1998, the year it earned national accreditation and began serving Passaic County. The new name helped build its identity as a premier service provider in northern New Jersey.

NewBridge saw another unmet need of providing homes for individuals with persistent and chronic mental illness when their families no longer could. A two-year study by eight NewBridge families culminated with the opening of NewBridge’s first affordable housing project in Lincoln Park in 2000. Working in partnership with government agencies, municipalities and other nonprofits, NewBridge has created more than 115 units of affordable housing, mostly devoted to people with special needs. NewBridge manages 84 apartments, as well as five group homes. In 2012, NewBridge won a Governor’s Excellence in Housing and Economic Development Award for its Evans Place apartments for adults with special needs.

Helping individuals in crisis has always been a pillar of NewBridge, and that commitment led the organization to take on the role of community first responder. NewBridge has been on the front lines helping communities in Morris and Passaic counties cope with natural disasters since the mid-1980s. Following the September 11, 2001 terrorist attacks, NewBridge collaborated with other mental health providers, social services agencies and health care providers to create the Morris County Human Services Response Network, which the state recognized for its best practices. The effort led to New Jersey becoming one of the first states to certify disaster response crisis counselors.

NewBridge remains true to its counseling roots, from helping families and individuals get through tough times to treating acute mental illness. NewBridge has specialized services for those resistant to treatment, and day programs for more intensive care. In 2001, NewBridge Enrich took root, helping clients develop skills for life and the workforce by tending a garden using a nationally recognized horticultural therapy program. It connected clients with the outside world, helping to break down stereotypes about the mentally ill and beautify the community.

NewBridge grew again in 2012 when it created its Child and Family Services program to serve clients of the state Division of Child Protection and Permanency. Recognizing NewBridge’s expertise in children’s mental health services, New Jersey chose NewBridge over eight other providers to serve victims of serious abuse and neglect, as well as their families, living in Morris and Sussex counties.

Milestones over The Past Ten Years

Nothing over the past decade was as remarkable as the dedication, ingenuity and flexibility of the NewBridge staff during the onset of the COVID-19 pandemic in early 2020. During a statewide shutdown, staff pivoted to ensure vulnerable clients received ongoing treatment. NewBridge used its expertise in crisis management to navigate the monumental hurdles posed by the pandemic.

2014: NewBridge opened a centralized Passaic County service center in Haskell, and received state approval to prescribe psychiatric medications in Sussex County to alleviate a shortage of prescribers. A delegation from one of China’s top mental health centers visited NewBridge to learn how the nonprofit treats people with mental illness.

2015: NewBridge opened a centralized Morris County service center in Parsippany and a computer lab for NewBridge Jobs Plus.

2016: The number of older adults served by NewBridge SAIL doubled, and NewBridge became a founding member of Community Partners for Hope, a coalition raising awareness about opioid abuse.

2018: NewBridge completed a six-apartment building in Clifton for families with a parent with mental illness, and trained 200 people in Youth Mental Health First Aid.

2019: The nonprofit launched Tame the Pain, a program that teaches older adults about the risks of prescription painkillers and the evidence-based alternatives for pain management.

2021: The nonprofit vastly increased the number of seniors receiving in-home counseling, started a compulsive gambling treatment program, and upgraded its group homes and other properties.

2022: NewBridge joined forces with Christian Health, a partnership to ensure NewBridge’s sustainability long into the future. NewBridge purchases property in Pequannock for a permanent headquarters/campus, and expanded the gambling treatment program to Sussex County.