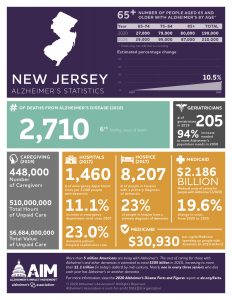 An estimated 5.8 million older adults in the U.S. — nearly two-thirds of them women —  have Alzheimer’s disease. The progressive brain disorder is the sixth leading cause of death in the nation. In New Jersey, the number of seniors with Alzheimer’s is expected to increase by 10.5% by 2025, according to the Alzheimer’s Association.

The Alzheimer’s Association sponsors Alzheimer’s & Brain Awareness Month to raise awareness of the disease and support for a cure. Throughout June, take time to learn the warning signs and ways to help people who help those affected and their caretakers.

What is Alzheimer’s disease?

Alzheimer’s disease is the most common cause of dementia. It is named after Dr. Alois Alzheimer, who in 1906 found abnormal clumps and tangled bundles of fibers in the brain of a woman who suffered memory loss, unpredictable behavior and problems using language before dying, according to the National Institute on Aging (NIH).

That is not fully understood, but it’s believed that several factors are involved:

About 1 in 10 people over age 65 have the disease. Watch this four-minute video from the National Institute on Aging on how Alzheimer’s disease affects the brain.

Is there a cure?

Not yet, but there are treatments to slow memory loss and improve people’s quality of life. An early diagnosis may allow for more effective treatment. It also can help in maintaining healthy relationships between the person with Alzheimer’s and their loved ones because the cause of new behaviors is understood.

How would I recognize Alzheimer’s in myself or a loved one?

The National Institute on Aging provides a list of 10 early signs and symptoms of Alzheimer’s:

Look for upcoming stories from NewBridge Services this month that address support for caregivers, ways to reduce your risk, and more.