Ending Bullying in Schools and Elsewhere 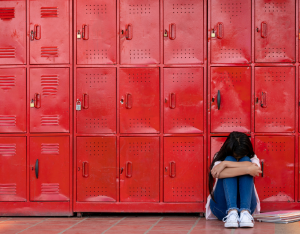 Electronic bullying was among the adverse experiences high schoolers reported in 2021, according to a study released Friday by the Centers for Disease Control and Prevention. A survey of 4,000 high school students found that nearly three-quarters reported at least one adverse childhood experience (ACE) last year, and that 8% reported four or more adverse experiences during the pandemic, greatly increasing their risk for mental health problems and suicide attempts, the researchers wrote.

During National Bullying Prevention Month, NewBridge Services is urging communities to take steps to stop all forms of bullying.

“Everyone can help prevent bullying by talking about it,” NewBridge Services CEO Michelle Borden said. “We need to support safe schools and communities where children see differences in people as positive, witness and express empathy, and learn peaceful ways of managing conflicts.”

Bullying takes various forms, from physical abuse to verbal attacks and rumor-spreading, but always, the intention is to inflict harm. Children’s expanding access to cell phones, social media websites and software applications has contributed to cyberbullying. Most bullying incidents occur on school grounds, and more than half are reported in middle schools, according to the most recent Student Safety and Discipline in New Jersey Public Schools report.

Bullying doesn’t only harm the victim, but also the perpetrator. Studies also show that children who bully are more likely to have problems holding down a job, struggle in relationships, become dependent on alcohol or drugs, and get in trouble with the law.

What Students, Schools and Parents Can Do

“Parents, along with other caregivers, school staff and youth group leaders, can help to build resiliency in children who have experienced adverse childhood experiences like bullying by talking to them, providing consistent emotional support, and working on solving problems together,” said Elizabeth Jacobson, director of Community Response and Education at NewBridge.

Classmates can help diffuse bullying by speaking up. A 2012 study found that when bystanders intervene, bullying stops within 10 seconds in more than half of incidents. One of the most important approaches for schools is to implement rules that delineate acts of bullying and the consequences of those acts.

“School culture must hold the expectation that bullying is unacceptable, and encourage students to intervene as upstanders when they witness a bullying incident,” Borden said.  “Otherwise, the student doing the bullying may interpret non-action by bystanders as endorsement of their behavior.”

Warning signs of being bullied:

Here’s how children can help themselves

NewBridge offers in-school trainings that teach children ways to handle bullying and deal with conflict, and educators ways to create a safe environment. Students learn coping skills and approaches to building self-image so they are less susceptible to other people’s opinions. Children learn to react non-emotionally to hurtful words and to take power away from a student who is bullying by not engaging him. NewBridge also offers programs for parents, to let them know what the latest threats are and how best to cope with them. For more information about in-school program provided by NewBridge, contact Jacobson at (973) 973-686-2242 or visit newbridge.org.