Marcy launched his “I’m Aware Campaign’’ to help end the stigma of mental illness and to raise funds for NewBridge Services, a nonprofit that provides counseling, housing and educational programs to more than 8,500 people in northern New Jersey each year.

“There are a lot of misconceptions about mental illness in our society. People shun it, and that’s wrong,’’ said Marcy, who is participating in the International Baccalaureate program at West Morris Central.

Mental health disorders affect an estimated 20 percent of adolescents. “While treatment is effective, too often teens go undiagnosed and untreated for years and years,’’ Marcy said. “Having a mental disorder must be approached the same way physical ailments are.’’

Marcy, 17, undertook the “I’m Aware Campaign’’ as part of an Approaches to Learning class, which required students to develop a way to support a charity over the summer.  Marcy, whose father is a NewBridge supporter, said he researched NewBridge to solidify his choice. “NewBridge makes good use of donations, using the money to provide services to people who need it,’’ he said. 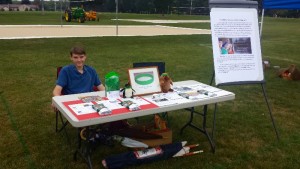 “We are grateful that this young man recognizes the problem of mental disorders among adolescents and are honored that he chose to support NewBridge to help his peers,’’ NewBridge CEO Robert L. Parker said.

Marcy has been spreading the word about the “I’m Aware Campaign’’ on social media, and he distributed information and sold bracelets at the Long Valley Green Festival on Sept. 12.

The experience has solidified Marcy’s commitment to support causes throughout his life. “If you don’t give back to those who need help, nobody gets anywhere,’’ he said. “You have to give back to the community.’’ Marcy lives in the Long Valley section of Washington Township with his parents.

The “I’m Aware Campaign’’ continues. Donations may be made to NewBridge at newbridge.org/donate.