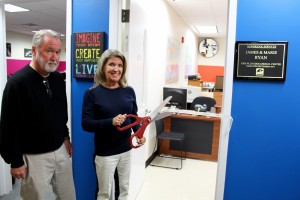 NewBridge Services dedicated a classroom for its alternative education program to the memory of founder James Ryan and his wife, Marie, at the nonprofit’s new location in Parsippany on Sept. 29.

The ceremony, attended by more than 40 guests, took place during an open house at the nonprofit’s 15,320-square-foot, centralized service center, which opened in August and provides counseling, substance abuse treatment to Morris County residents.

“NewBridge has moved deeper into Morris County to better serve the county’s residents, with easy access from routes 80, 287 and 46,’’ NewBridge CEO Robert L. Parker said. “This location allows us to meet the high demand for care, without people having to face long waiting lists.’’

Located in the in the Troy Office Center off eastbound Route 46, the facility has 20 counseling rooms and spacious group therapy rooms, as well as a drop-in center for clients. It’s also the new home of NewBridge Jobs Plus, a free program that has helped more than 3,000 young adults earn their high school diplomas and prepare for careers.

Guests cheered as founder Jim Ryan’s daughter, Debbie King, and her husband, George, cut the ribbon on the entrance to one of two NewBridge Jobs Plus classrooms.

Ryan was a decorated World War II veteran who recognized the need for community-based mental health services in Pequannock Township and surrounding towns, and worked with his pastor at the First Reformed Church of Pompton Plains and three others to create the Pequannock Valley Mental Health Center in 1963. The PVMHC later changed its name to NewBridge Services to reflect its expanded services and coverage area. NewBridge now serves more than 8,500 people each year in Morris, Passaic and Sussex counties, and beyond.

Ryan served as president of the NewBridge board of trustees and on other committees, and remained an avid supporter until his death in 2005, at age 84.

“My father was a very caring and loving individual who would do anything to help others,’’ said Debbie King. “My father believed in the organization, and the work that (NewBridge CEO) Bob Parker and all at NewBridge do to help others.’’

Debbie and George King donated $5,000 to support NewBridge Jobs Plus and her employer, Bloomingdales, made a matching donation.

The youth group at Grace Bible Church of Pompton Plains raised $400 for NewBridge Jobs Plus to buy a tablet, said Amy Sheppard, supervisor of the program. Members of the church presented a check to NewBridge yesterday. 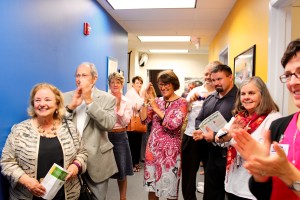