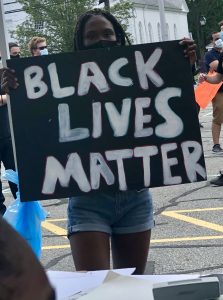 “We are proud of the leadership skills and empathy they’ve demonstrated,” NewBridge Jobs Plus Program Director Amy Sheppard said. “They created positive, respectful forums where people could make their voices heard.” 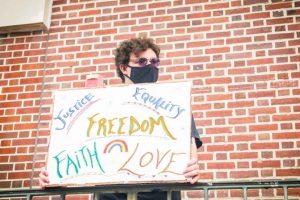 Outraged by the killing of George Floyd in Minnesota on Memorial Day and other injustices against black Americans, Russo wanted to “to make a statement no one would forget.” He didn’t know if people would come, but Russo forged ahead. He sent an invitation out on his Instagram and Snapchat accounts for a June 2 event at Lawton C. Johnson Summit Middle School. “It blew up,” the Summit resident said. About 1,500 people attended.

“My feeling was, if we can change one person’s mind, it’s worth it,” said the 18-year-old, who enrolled in NewBridge Jobs Plus in December. 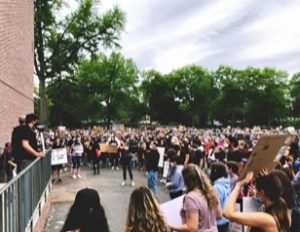 The experience has empowered him. After Russo earns his high school diploma, he plans to pursue a degree in video game development at the County College of Morris. “It showed me that when I put my mind to it, I can get things done.”

Gaskins, who lives in Lincoln Park, helped plan a June 6 event on the lawn of the Pequannock Township municipal building. The estimated 500 protesters then marched through the streets, demanding an end to racism.

“It is so sad to see this stuff happen, and I’m old enough to do something about it,” said Gaskins, who organized the event with Pequannock High School graduates Liam Arnold and Jackie Morales. “We want to spread awareness,” the 18-year-old said.

“There were a lot of young people, but also parents and grandparents, and even some of my old teachers,” Gaskins said. She attended Pequannock High School before recently enrolling in NewBridge Jobs Plus. Gaskins said she hopes to organize other events, including voter registration efforts.

NewBridge Jobs Plus has helped more than 1,000 young adults turn their lives around. Free to area residents ages 16 to 24, NewBridge Jobs Plus s the longest-running program of its kind in Morris County. Students learn at their own pace, and receive academic assistance, life and professional skills training, career coaching, and counseling to overcome emotional challenges. Ninety percent of students earn a diploma and 85 percent go on to college, a technical school, a job, or the military.