Raising Upstanders Can Stop Bullying, In Person and Online 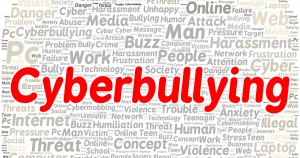 Children and teens are spending more time online during the COVID-19 pandemic, increasing the risk of cyberbullying. “With so much more screen time, there’s more opportunity for it to happen,” said Beth Jacobson, director of Community Response and Education for NewBridge Services.

During National Bullying Prevention Month, NewBridge urges parents to help children become upstanders. “We all need to be upstanders, willing to call out bullying and offer support to children who are targets of it,” Jacobson said. More of the onus on bullying prevention falls on parents this year, with most students doing at least part of their schooling virtually from home.

Bullying includes physical abuse, verbal attacks and rumor-spreading. Always, the intention is to inflict harm. “We want our kids to understand that bullying in any form is not acceptable,” Jacobson said.

The Impact of Bullying

The middle school years are ripe for bullying, but negative behaviors towards classmates take root earlier, she said. “You want to begin ingraining the qualities of being upstanders early, to build children’s resiliency,” Jacobson said.

According to the National Bullying Prevention Center, one in five children ages 12 to 18 reported having been bullied. Of those, 15% said it happened online or by text. The percentage of people who’ve experienced cyberbullying at some point in their lives more than doubled between 2007 and 2019, the center reported.

Bullying can leave serious emotional scars on both the victim and the perpetrator. Studies show that children who bully are more prone in adulthood to addiction, and have trouble keeping a job and maintaining relationships. Bullying also has been found to have negative consequences for children who witness an incident but do nothing to stop it.

The unrest of this year makes it even more imperative for parents to be mindful of their own behavior. Whether parents notice or not, children are paying attention to their actions and emotions, Jacobson said.

Role-playing can be an effective technique to teach children how recognize and appropriately respond to bullying, Jacobson said. Children can practice standing up to aggressors, and giving empathy and support to someone who’s been bullied. Checking in daily with children about their feelings makes them more comfortable sharing both good and concerning experiences, Jacobson said. Parents should also be on the lookout for changes in behavior.

Signs a child is being bullied (from StopBullying.gov):

Signs a child is doing the bullying:

Here’s how children can become upstanders and help themselves:

For more information about in-school program provided by NewBridge, contact Jacobson at 973-686-2228 or ejacobson@newbridge.org.